Although most of us remember learning to play our first musical instrument in a classroom, or maybe at an evening class if you left it a little late, technology has finally found a way for us to learn from the cosy confines of our own home. Do you dream of being a rock god? Want to write the kind of songs people can’t get out of their head? Or maybe you just want to learn a few cords for your own pleasure, whatever your motivation, there’s an app for that. Coach Guitar is the brainchild of Manomaya SAS, Paris based software developers that have found a way to simplify the complex process of learning to play this popular stringed instrument.

We all learn in different ways, not everyone can understand the complexities of music theory or has the ability to read tablature. For people like that, who prefer a more hands-on approach to their studies, Coach Guitar is ideal. It’s based solely on visual learning, offering a way for complete beginners to strum out their favourite tracks in a blistering acoustic performance.

Students are walked through new songs in a stage by stage video presentation. Lessons are boosted by the appearance of a helpful animated fretboard, sound reinforcement and slow-motion repeats. To get you started there are four songs which come as part of a bundle when you download the app from Google Play. The app is free but there is an extensive collection of bonus tracks which you can download once you master the first four, and these count as in-app purchases. Currently, the price of individual songs ranges from £1.22 to £3.11 which may seem a little steep, but in comparison to the cost of real life guitar lessons it’s pretty reasonable. Plus Couch Guitar is conveniently on hand whenever you get the urge to play and can be switched off when you don’t, unlike a teacher.

Once you’ve got comfortable with the strings, there are around 70 other tracks to choose from and new titles are added regularly. With each purchase you’ll find details about the artist and song, along with a predicted difficulty level and an audio clip demonstrating how it should be done. Don’t worry if it all sounds too much, Coach Guitar is aimed at all abilities, so you’ll find three tiers of expertise starting with beginner, then intermediate, and finally advanced. 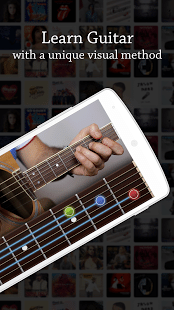 The software uses a video to break down its instructions. These tutorials contain very detailed images and clips of the instruments strings and neck, plus finger placements. During each Coach Guitar session the fretboard is rendered in black, representing the guitars neck, and there are differently coloured dots for each finger. If you’re having trouble keeping up with a particular concept, that’s no problem. Just put the VT on a loop or slow it down to catch the nuances of a specific chord.

The team behind Coach Guitar were keen to prove that an instrument as multifaceted as the guitar could be played using just visual guides. To refine their theory, they tested out ideas on professional guitarists, teachers, students and people who’d only just started to play. When they collated the information gathered, it became clear that the animated aspect, combined with a simple colour scheme and video based information was the most effective solution.

Guitar App for Android 4.0 and more

The version currently available is 1.3.2 and requires Android 4.0 and upwards. Since its launch the app has had an extensive facelift, which includes a range of social media functionality. Users can work towards unlocking badges, achieve higher skill levels and then share their accomplishments with others on Facebook. Plus there’s an at-a-glance feature which reveals a students’ progress in the form of a news feed.

In a press release, the CEO of Manomaya SAS, Boris Douarre explained that: “Coach Guitar is set up to feel more like a video game with multiple levels to be mastered.” He continued: “It is a very gratifying learning method since each lesson is broken down into smaller, achievable goals. More than a million people have downloaded Coach Guitar to learn how to play their favourite songs without music theory or guitar tabs.”